The Logic Behind Safes in Fallout 4

Ever wondered why a safe in Fallout 4 or any other Fallout game, has such a weird combination of items? There’s a comic that tries to answer that difficult question. 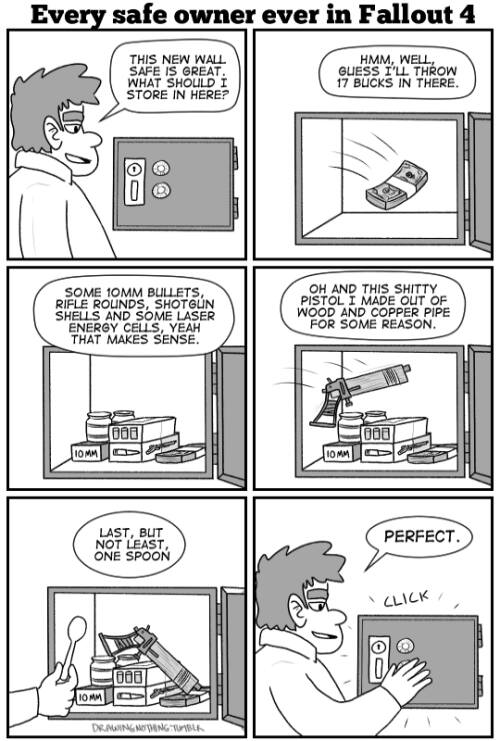 There’s no real logic behind the contents of a Fallout 4 safe. Depending on the place, it can include an item that has something to do with a mission, but more often than not, it’s simply filled with stuff that might come in handy or some that don’t.

A firearm, some ammo, a random amount of money, something you use in a kitchen, something that’s even more worthless than the lint you might have had in your pocket during the old Sierra quest games, and that’s about it.

And it can be quite disappointing working on a safe, especially a difficult one that requires an advanced lockpicking skill, and find out nothing that you really need or can find use of inside the safe. Sometimes I spend a lot of time on those safes linked to computers, trying to find the password, and then ending up with ammo to a weapon I never actually use.

Logical safe content or not, Fallout 4 is an awesome game. Some, I know, were disappointed with the direction the team took – a lot more FPS elements, maybe not enough RPG to it. But the franchise took a step forward in terms of graphics and game mechanics, and the story was once again engrossing and compelling. Far Harbor, the DLC released less than two weeks ago, has been a fun addition and expansion to the game.

Image via Drawing Nothing