Only half of all Gamers Purchase DLC – Reasons Why

A report by analyst firm EEDAR states that only half of all gamers bother purchasing DLC, and that the people who don’t have more than a few reasons why. 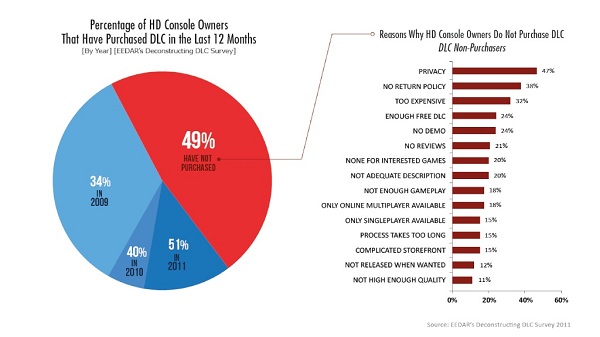 Gone are the days of the $30 expansion pack, which released a bundle of content and most games were lucky if they sold enough copies to even merit a single expansion. Smaller DLC bundles have swept expansion packs off the market, thanks to the lower price tags and the smaller amount of content that developers have to generate with each release.

While DLC might be standard fare for this generation of gaming platforms, not everyone is happily buying into the idea of purchasing small addons for their games.

According to EEDAR, 49% of all gamers across Xbox 360 and PS3 have not bought a single DLC pack over the past year. When asked why they refused, the reasons are rather interesting.

47% of people questioned replied that privacy was a major concern of their when downloading content, and 38% pointed out that the lack of a return policy for these extras was enough to scare them off. I wouldn’t be surprised if the PSN crash had something to do with the worry about privacy, and causing people to become wary about adding their credit card info across a gaming network.

A good third of all respondents pointed out that the DLC being offered was too expensive for what they were getting in return, and nearly a quarter stated that the lack of free DLC was a big turn off for them. Sadly, most DLC is not free, which is a bit of an issue when DLC that contains the actual ending to a game costs somewhere around $15 for that final hour of game play.

Other reasons include general lack of quality, being that they are released too soon or too late with not enough, and the lack of a trial or demo of the DLC to see if it is worth it.

According to sources, DLC purchases generated an additional $875 million in sales this year for the gaming industry. This figure is expected to jump past the $1 billion mark next year, thanks to heavy hitter releases which will focus heavily on DLC like Modern Warfare 3.

What’s interesting is despite the fact the DLC market is on the rise, the number of gamers refusing to purchase DLC is also on the rise. In 2009 34% of gamers did not purchase DLC, with 40% in 2010. It seems that more and more people are becoming die hard DLC fans, while the average gamer is becoming less interested.

In other news, be sure to check out the Top 10 Zombie Games for Xbox 360 and some new screens and impressions for the Syndicate reboot.