Fruit Ninja Kinect and the State of Xbox Live Arcade

Apparently a lot of people are excited about the upcoming fruit slashing arcade title ‘Fruit Ninja Kinect’. I’m not one of them. 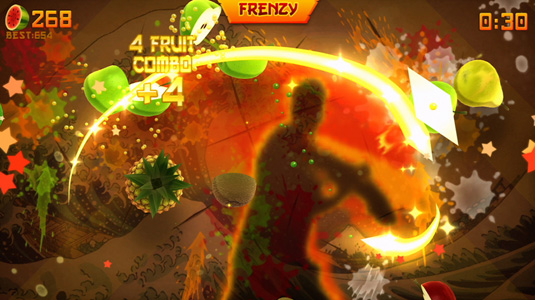 For those of you who haven’t heard, ‘Fruit Ninja’ is the apparently highly anticipated new Xbox Live Arcade game by Halfbrick Studios. The premise is simple: fruit falls all over the screen and players have to slice them in half by making exaggerated arm and hand motions, hence becoming a “Fruit Ninja”.

While the game itself doesn’t exactly look like the worst thing to ever happen to the Kinect, one has to wonder if it isn’t perhaps the least innovative title to ever come along.

The premise of hitting things on the screen by moving one’s arms around isn’t exactly something new. Just about every other mini game on the Kinect follows the same formula. Objects appear on screen, players moves hands towards said objects, player gets points, rinse, wash repeat.

Let’s not forget the fact that this title was orginally an iPad game before being translated over to the Kinect. What ever happened to originality? If having players hit fruits instead of soccer balls, leaks in the glass or other projectiles is considered a stroke of creative genius, then Xbox Live is heading for a serious downward slope. 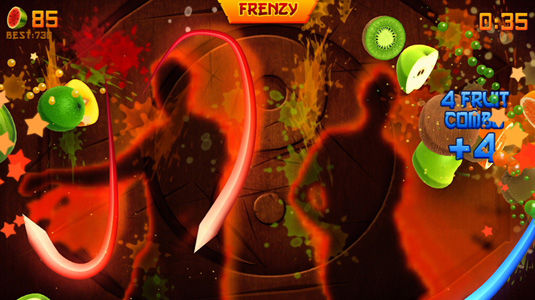 I suppose that my biggest gripe here is that this game is part of the Summer of Arcade promotion that Microsoft has been pushing. Basically what this entails is that if players purchase all of the games included in the Summer of Arcade line up they will receive a free game at the end of it.

The problem is that four of the games look pretty good and appealing while the fifth is title ‘Fruit Ninja Kinect’. Even if a die hard gamer buys the other four, they had better hope that the not only own a Kinect but also want to shell out 800 Microsoft points for a pointlessly shallow party game. I’m not against throwing the occasional bone for Kinect users, but at the same time tossing this title in with the others just insults every other Xbox player.

Maybe I’m being too picky here, you tell me. What do you think about ‘Fruit Ninja Kinect’? Are you more enthused than we are?

Be sure to read up on some more interesting uses of the Kinect such as Action Horror Title ‘Rise of Nightmares’ Coming to Kinect and Sharpen Your Music Skills by Playing Kinect Air Guitar.