First look at Horde Mode in Gears of War 3 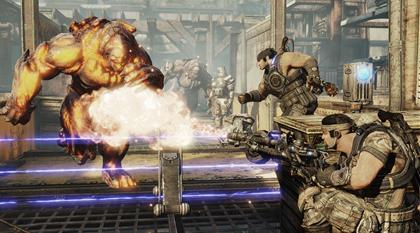 Players will still have to face off against increasingly difficult waves of enemy Locust units, along with the new Lambent forces, in order to survive. However, players now have the added option of earning money from kills and points which they can use in a number of ways.

Players will be able to set up command posts, build turrets and gun emplacements, lay down traps and barriers and even purchase new and better weapons. Though none of these purchasable upgrades will be invulnerable: the horde will target key structures and players equally, which means players will have to defend their investment or risk losing it.

Also, as a new addition, players will be able to use money to come back into the fight at any point. Players will then want to be wise with their spending, keeping a comfortable cash reserve on them, especially at later wave levels.

The ability to earn money and build defences will be a welcome added layer of depth to an already addictive mode. The first Horde Mode has so far helped give Gear of War 2 incredible staying power and online presence, even years after having been released. The new mode looks like it will continue to provide the series with a long and healthy existence. As well, with over one million pre-ordered copies already sold, the sheer size of the Gears of War 3 community will be one to reckon with.

Expect a few other surprises, such as a wider variety of foes than those found in Gears 2 and all around new weaponry.

Gears of War 3 has recently finished its Summer Beta and will be released on September 20th.

For other exciting E3 news, watch the New Tomb Raider Trailer, from E3 and keep on following Xbox Freedom for more updates from the conference.