The Elder Scrolls has some of the most in-depth and elaborate sets of lore in video games. With so many sources of lore, let’s take a look at some of it and piece together what we can about the game.

With Skyrim quickly approaching, it is important to know some of the background of the world within The Elder Scrolls series. While Skyrim will be a totally different story from Oblivion, it is certain that they both take place in the same world with the same consistent histories. All of the information provided will be taken from The Imperial Library, a very reputable and trusted source for any bit of lore dealing with The Elder Scrolls which finds its lore from the in-game books, notes, etc., so us continue with something a little more in-depth, though quite a common theme throughout, The Divine Spirits of this wonderful and fictional world. 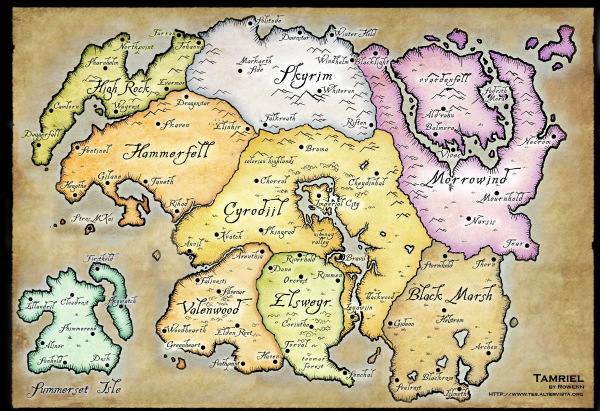 The Divine Spirits in the world of Tamriel (the main continent upon which the nine provinces are separated) are different for each of the races, called Pantheons. The author of the reading that we will take a look at, Varieties of Faith in the Empire by Brother Mikhael Karkuxor of the Imperial College, states that,

“This is my best attempt at a listing of the pantheons and associated divine spirits of Tamriel’s dominant cultures. This list is by no means complete (the Imperial City of Cyrodiil alone boasts a vast host of saints and holy spirits). It only includes the most important spirits revered by native members of the culture.”

While there are numerous Divine Spirits that would take quite a bit of time to elaborate on, there are a certain group, The Nine Divine, that play particular importance in The Elder Scrolls, these are Akatosh, Alduin, Arkay, Dibella, Julianos, Kynareth, Mara, Strendarr, Talos (or Tiber Septim), and Zenithar, and those are who we shall focus on today.

Akatosh (Dragon God of Time): Akatosh is the chief deity of the Nine Divines (the major religious cult of Cyrodiil and its provinces), and one of two deities found in every Tamrielic religion (the other is Lorkhan). He is generally considered to be the first of the Gods to form in the Beginning Place; after his establishment, other spirits found the process of being easier and the various pantheons of the world emerged. He is the ultimate God of the Cyrodilic Empire, where he embodies the qualities of endurance, invincibility, and everlasting legitimacy.

Alduin (World Eater): Alduin is the Nordic variation of Akatosh, and only superficially resembles his counterpart in the Nine Divines. For example, Alduin’s sobriquet, ‘the world eater’, comes from myths that depict him as the horrible, ravaging firestorm that destroyed the last world to begin this one. Nords therefore see the god of time as both creator and harbinger of the apocalypse.

It is important to note that Akatosh and Alduin are actually the same god, with Alduin being the Nordic variation of Akatosh (the one that will most likely be referenced in Skyrim). Alduin is thought to have a heavy presence in Skyrim once it releases being that he is the World Eater seen in the videos and pictures.

Arkay (God of the Cycle of Life and Death): Member of the Nine Divines pantheon, and popular elsewhere as well. Arkay is often more important in those cultures where his father, Akatosh, is either less related to time or where his time aspects are difficult to comprehend by the layman. He is the god of burials and funeral rites, and is sometimes associated with the seasons. His priests are staunch opponents of necromancy and all forms of the undead. It is said that Arkay did not exist before the world was created by the gods under Lorkhan’s supervision/urging/trickery. Therefore, he is sometimes called the Mortals’ God.

Julianos (God of Wisdom and Logic): Often associated with Jhunal, the Nordic father of language and mathematics, Julianos is the Cyrodilic god of literature, law, history, and contradiction. Monastic orders founded by Tiber Septim and dedicated to Julianos are the keepers of the Elder Scrolls.

Kynareth (Goddess of Air): Kynareth is a member of the Nine Divines, the strongest of the Sky spirits. In some legends, she is the first to agree to Lorkhan’s plan to invent the mortal plane, and provides the space for its creation in the void. She is also associated with rain, a phenomenon said not to occur before the removal of Lorkhan’s divine spark.

Mara (Goddess of Love): Nearly universal goddess. Origins started in mythic times as a fertility goddess. In Skyrim, Mara is a handmaiden of Kyne [Nordic Goddess of the Storm and favored god of warriors]. In the Empire, she is Mother-Goddess. She is sometimes associated with Nir of the ‘Anuad’, the female principle of the cosmos that gave birth to creation. Depending on the religion, she is either married to Akatosh or Lorkhan, or the concubine of both.

Stendarr (God of Mercy): God of the Nine Divines, Stendarr has evolved from his Nordic origins into a deity of compassion or, sometimes, righteous rule. He is said to have accompanied Tiber Septim in his later years. In early Altmeri legends, Stendarr is the apologist of Men.

Tiber Septim (Talos, the Dragonborn): Heir to the Seat of Sundered Kings, Tiber Septim is the most important hero-god of Mankind. He conquered all of Tamriel and ushered in the Third Era (and the Third Empire). Also called Ysmir, ‘Dragon of the North’.

Zenithar (God of Work and Commerce, Trader God): Member of the Nine Divines, Zenithar is understandably associated with Z’en [the God of Toil]. In the Empire, however, he is a far more cultivated god of merchants and middle nobility. His worshippers say, despite his mysterious origins, Zenithar is the god ‘that will always win’.

Because there is no way to ever fully cover all of the gods, I have included three bonus gods bellow as well as a bonus piece of information that you may find useful in your journeys.

Lorkhan (The Missing God): This Creator-Trickster-Tester deity is in every Tamrielic mythic tradition. His most popular name is the Aldmeri ‘Lorkhan’, or Doom Drum. He convinced or contrived the Original Spirits to bring about the creation of the mortal plane, upsetting the status quo. […] After the world is materialized, Lorkhan is separated from his divine center, sometimes involuntarily [depending on religion and location], and wanders the creation of the et’Ada [The et’Ada are the “original spirits”, a race of divine beings resulting from the “interplay” of Anu and Padomay]. To the High Elves, he is the most unholy of all higher powers, as he forever broke their connection to the spirit plane. In the legends, he is almost always an enemy of the Aldmer [translated as “First Folk” or “Elder Folk”] and, therefore, a hero of early Mankind.

Shor (God of the Underworld): Nordic version of Lorkhan, who takes sides with Men after the creation of the world. Foreign gods (i.e., Elven ones) conspire against him and bring about his defeat, dooming him to the underworld. Atmoran myths depict him as a bloodthirsty warrior king who leads the Nords to victory over their Aldmeri oppressors time and again. Before his doom, Shor was the chief of the gods.

Sheogorath (The Mad God): The fearful obeisance of Sheogorath is widespread, and is found in most Tamrielic quarters. Contemporary sources indicate that his roots are in Aldmeri creation stories; therein, he is ‘born’ when Lorkhan’s divine spark is removed. One crucial myth calls him the ‘Sithis-shaped hole’ of the world.

If you liked this article, you might also like to read the first installment of this series, The Elder Scrolls Lore – Pt. 1 – Skyrim! If you have any other games that you are interested to hear the back stories and lore for, let us know in the comment section below!