Get ready for some cooperative dungeon crawling this Summer with the announced release of action RPG Crimson Alliance.

Following in the tradition of action RPGs laid out by games like Diablo and Torchlight, Crimson Alliance will allow players to choose one of 3 unique classes, each with their own skill set, and embark on a fast past dungeon crawl. Expect to find tons of loot along the way, and addictively level up player characters.

Players will be able to join up to 3 friends to play through the adventure cooperatively over Xbox Live, though no word on whether the game will support local multiplayer as did Ascaron’s Sacred.

Despite the fact that this formula has been followed countless times before, Certain Affinity president Max Hoberman believes that Crimson Alliance will still manage to bring something unique to the table. With in depth customization of each character, players will be able to specialize their roles to the point that two people could be playing the same character yet enjoy completely different gameplay experiences. 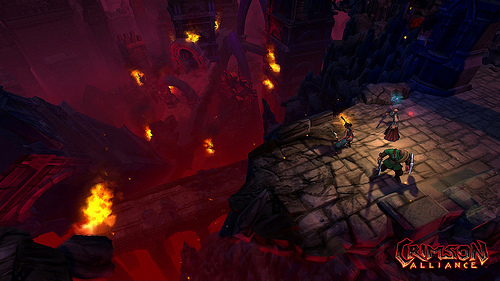 Though this will be the first game developed by the fledgling studio, almost the entire development team is composed of game industry veterans. With designers who have worked on everything from Left 4 Dead to Halo on the team, the game has the potential, along with several other summer releases such as Dungeon Siege III, to help fill in the conspicuous void of action RPGs on the Xbox 360.

Crimson Alliance will be showcased at publisher Microsoft’s booth at the upcoming E3 exhibition next week, followed by a later summer release date.