Edible Xbox art is suddenly experiencing a high, I guess and this Bioshock Bento art is one of them. For all of you who don’t know what a bento is; Bento is a traditional Japanese lunch box, particularly for the office goers, which is packed with varieties of delicacies made up from rice, fish, meat and other such stuff. And people, now a days tend to pour their hearts in the form of art in packing these boxes, hence, making them fun to much during lunch time. 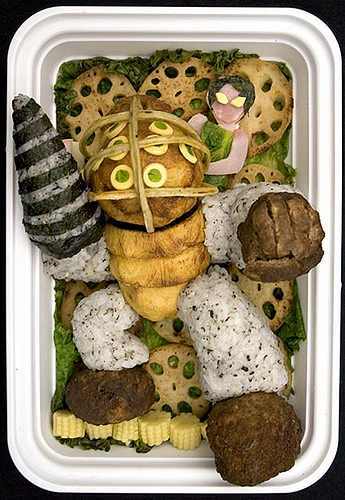 In this particular image, from AnnatheRed, you can see the hero of the game, Jack in an intimidating stance ready for some serious action. All in all, I must appreciate the hard work that the user has put forth in making this artistic snack box. And to be frank, I don’t think anyone has enough patience to mold all the rice and meat to make this fantastic piece of edible art, am I right?

A piece of advice though, please start doing a business by selling such fun lunch boxes as it will make you financially independent in no time, which is very much necessary in such times of recession.

In the meanwhile, be sure to take a look at other edible Xbox arts, which include a collection of yummy Xbox 360 cakes and the strength giving Gears of War Imulsion drink from the Gears of War series.