While Battlefield 3 has been much anticipated, its developers have waited until recently to release any footage revealing gameplay. Thankfully, we have live footage of gameplay revealing some this awesome game’s many amazing features.

Last Thursday evening on Late Night with Jimmy Fallon, the exclusive gameplay was shown in a mission where the player is looking for lost squad mates, and right off the bat it is clear to see how great this game looks. The animations and slow-mo effects really give this game some depth, and it was exciting to see actual implementation of it. While this is not the first time that footage has been shown, it is one of the first times that live footage has been done, and seems to really be polished. 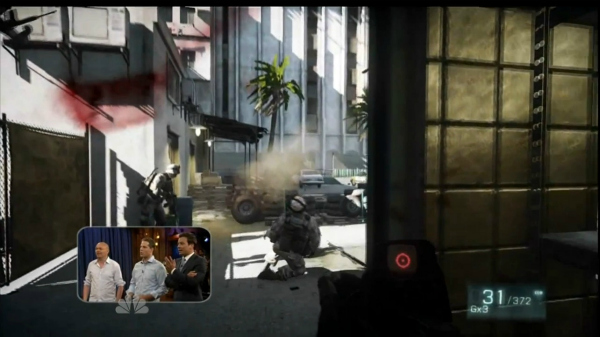 Viewers are able to see many aspects of the game, and one that I really happened to like was the dragging of your team mates away from fire and into cover. This really gives a realistic approach to the game, something that not many can reproduce. The developers were even kind enough to let Fallon play, and once he did it was clearly shown how…”easy” the game will be for new players. All joking aside, the game looks amazing, and this footage really get me excited, as I’m sure it has for all of you. What are your thoughts on the footage, and what do you hope to also see before the release? Leave your comments below, and also check out the full four-minute video below!

You may also want to read about Battlefield 3 – First Impressions and Modern Warfare 3 – Campaign Mode!