Who says Batman has to be serious all the time? Check out this hilarious ‘Big Head’ cheat, or glitch, that was discovered in Arkham City. 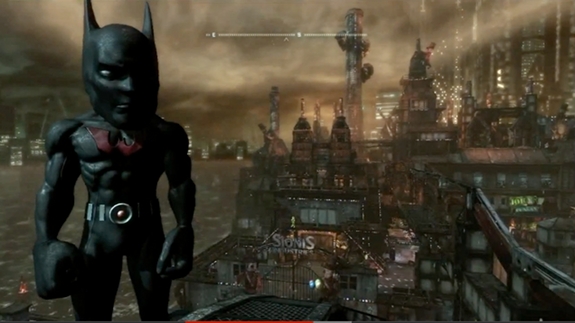 Have you been enjoying Batman: Arkham City lately and started to wonder if the game could be just a little less bleak at times, what with Batman being such a dark and serious character? Well, no worries: thanks to an old-school style cheat, you can now turn the Dark Knight into a massive, ‘Big Head’ cartoon of a character, that reminds me of more than a few bobble heads.

No wonder Batman doesn’t use weapons all that often: with massive, brick-fists, he can smash even the worse of his enemies into submission in a matter of seconds! Who needs a utility belt when your fists can become giant hams?

To disable the cheat, simply repeat the process and Batman’s cranial swelling will go down.

I suppose one of the neat things about this is that it opens the door to the possibility that there might be more cheats, secrets and other Easter Eggs lurking around the corner that people haven’t yet stumbled upon. It kind of brings me back to “the good old days” of gaming, when enough messing around often lead to some fun and fruitful results, and cheat codes were just the name of the day.

In other news, be sure to check out the upcoming A Game of Thrones Action RPG that’s coming to Xbox 360 and some rumours that the Xbox 720 will feature Windows based operating system.