Enjoy The Heat Of Summer And The Swinging Of Bat Through Backyard Sports: Sandlot Sluggers

Game like soccer and baseball has been played in backyards by kids since the games were introduced in earth. These games have no religion or country and defy everything which wants to suppress it except for our motherâ€™s shouting for breaking the glass. So, to expand this tradition, 1998 saw the launch of Backyard Sports series starting with Backyard Baseball and soon Basketball, soccer, football, Skateboarding and Hockey followed over the years and now, they are ready to launch the latest Backyard Sport named â€œBackyard Sports: Sandlot Sluggersâ€. This has been based on one of Americaâ€™s favorite past time and it shows the real fun of playing it in a stirring arcade style. 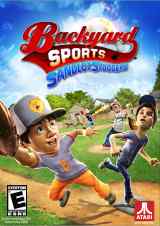 As the heat takes up because of the rising temperature and the all the snow is melting away, every boyâ€™s mind strikes with one thing; Baseball. Sandlot Sluggers has presented this American pastime in an excellent manner. It shows the fun of playing with the best neighborhood friends and when it comes to baseball, it is always played in a very exciting manner.

Packed with surprises and commentary which will make the player laugh, it also boasts of larger-than-life animations, exquisite graphics, enhanced game-play and a huge range of option. It’s one attractive quality is that it might make those couch potatoes who had forgotten the fun of playing in the neighborhood, realize the thing which they were missing till that day and make them step away from their consoles and home into the fresh out doors and give them a sweet taste of the game.

This one has been made by the collaboration of HB Studios and Humongous and itâ€™s going to be published by Atari. The release dates has been set on 25th May, 2010 and I bet, itâ€™s going to be a treat for all the Xbox360, Wii and Nintendo DS players. It costs $59.99 for Xbox 360 players.

Here are a few games like Mass Effect 3 and Alien Colonial Marines, which might suit your taste.