November 15th marks the end of this month’s first fortnight, and so the Xbox Team is getting ready to roll around more free games. Find out what is coming in and what is going out in this story! 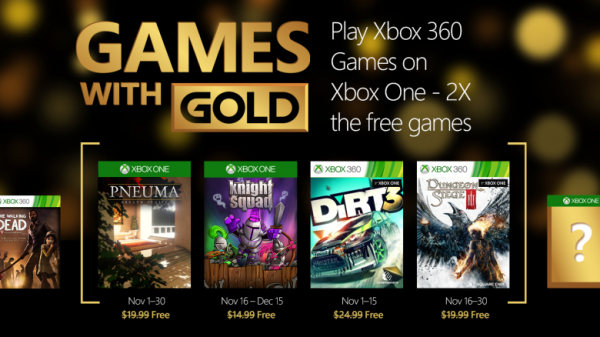 Xbox owners with an active subscription to Xbox Live have been getting free games for a while with Xbox Live’s Games With Gold. These four games used to be for both Xbox 360 and Xbox One, so users who had the two consoles were able to get the most out of their subscription, but with the Xbox One being updated to play 360 games via the new backwards compatibility functionality, Microsoft’s latest console is now effectively getting four free games every month, starting now.

As every month, now is the time when some of the games get switched around, so today is your last opportunity to download, if you haven’t done it yet, some of these month titles. The games changing around are:

The Walking Dead: Season One ($25 otherwise)

In this adventure, you play as Lee: a young college professor who is on his way to prison when the zombie apocalypse breaks loose. You will have to manage your past, present and future, and take a lot of decissions along the way to protect the people you care about.

One of the coolest racing games in the market, in Dirt 3 you will race through several rally tracks, customize your car, and perform the best you can to earn first place. The game got fantastic reviews all over when it first released, so if you’re interested in racing games at all, don’t miss the opportunity to play this.

As we explained before, today is the last day where you can get these two titles, for starting tomorrow (IE, November 16), they will be replaced for Knight Squad (playable on Xbox One) and Dungeon Siege III (playable on both Xbox 360 and Xbox One via backwards compatibility). Let us also point out, this is the first month the Xbox One has been able to play the Xbox 360s games, and Microsoft have promised to keep this tendency going for the future, effectively doubling the amount of games Xbox One players get every month, so don’t miss out, and acquire everything you can – these are timed offers after all, and they are completely free.

Finally, while we are on the topic of free games, Xbox owners will also get access to other two other titles as soon as they subscribe, being Pneuma the other title that rounds up this month’s offering. This is one of the best months in the program so far, based on the sheer variety and quality of the titles, and if you’re one of the unlucky ones who is not playing Fallout 4 in this very same moment, rest assured, for the Xbox team has got you covered at least the free games will keep coming.

Be social! Follow Xbox Freedom on Facebook and Twitter, and read more related stories at Turtle Beach Ear Force XO One Gaming Headset for Xbox One and Xbox introduce their 104 backwards compatible games.