Just in time for Halloween; in celebration of the undead everyone loves to kill, here are the top 10 Zombie games on Xbox 360 in no particular order. 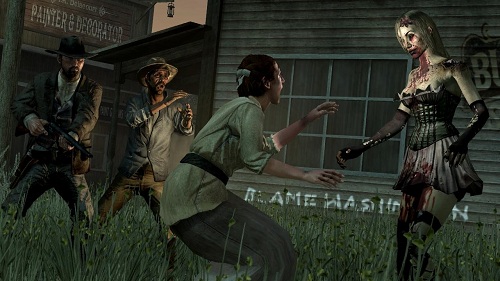 There’s a lot to love about Rockstar’s zombies meets the old west stand alone expansion to Red Dead Redemption. There’s something inherently awesome about destroying the undead from horseback with an old school rifle, or with a six shooter in a street designed for duels.

This expansion offers a decent single player story campaign and a ton of additional multiplayer modes such as team survival and competitive town cleasning.

It’s really only a matter of time before some movie studio makes a movie bases off this. 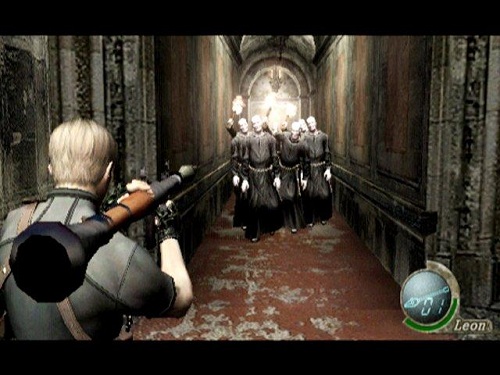 Released a few years ago over the Gamecube, and then ported numerous times, Resident Evil 4 may be a last generation title but it still manages to put a good deal of recent games to shame.

Easily one of the best games in the series, Resident Evil 4 offers great gameplay mechanics and depth, a creepy atmosphere and tons of replayability and bonus modes once you complete it for the first time.

It’s one of those games that, if you haven’t played it before, you owe yourself to play and beat, and possibly beat again, this lifetime. 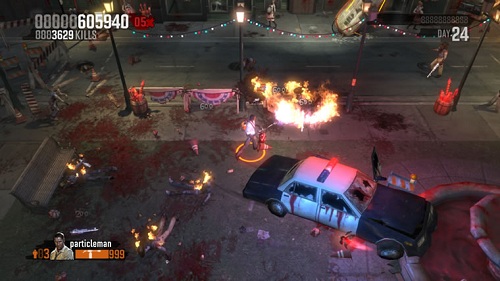 It’s not the first game to bring the twin stick shooting concept to zombie games, but it’s one of the more enjoyable ones.

Released over Xbox Live Arcade, this is one of those titles that’s great to own and boot up every now and again when friends are over. With top notch graphics able to handle a ton of zombies on the screen at once, environmental harazards and four players, all in glorious 3D, there’s always a lot of action going on at any time.

While the gameplay may be shallow at its heart, there’s something about running around with three friends on the same screen chainsawing zombies and scrambling to rescue civilians. 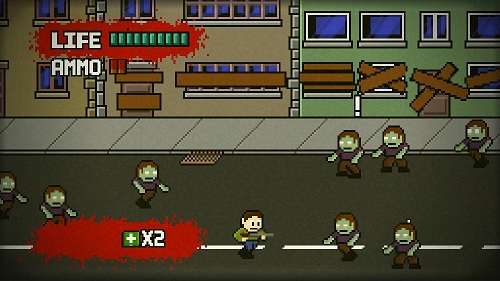 Dead Pixels is strangely reminiscent of River City Ransom, only with Zombies instead. Players are tasked with running 20 streets during an apocalypse in order to catch a way out of an infected city. To get there, up to 2 players will have to work together and shoot their way through tons of zombies, all the while looting buildings along the way.

Periodically, players will have access to shops where they can stock up on medical supplies, grenades, ammo (very important!) and even new weapons, while selling off all the swag they pick up along the way. It’s simple, but the guns are satisfying, and the graphics are charming. 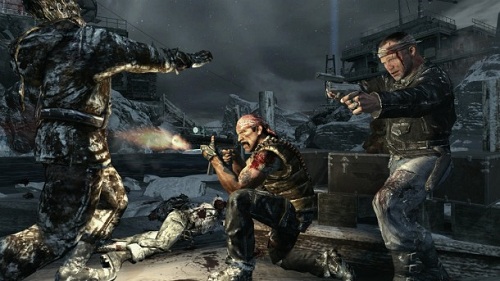 Okay so this isn’t really the entire game, but the Zombies mode this time around is so good and expansive that no one would be surprised if they release it as a standalone title sometime in the future.

Featuring four player coop, players get to live out their dreams of fending off waves of zombies in locals ranging from abandoned movie theatres, to George Romero movies, to moon bases. Filled with bizarre easter eggs, and some witty conversations between the characters, the adventure is both funny and horrifying at the same time.

There may be no real end goal in this mode, but that doesn’t mean it isn’t competitive. You will quickly find yourself pushing further for high scores and the personal satisfaction of lasting one wave longer each time. 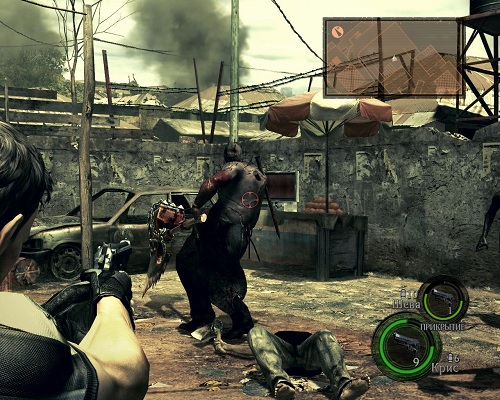 Two Resident Evil games on the same list may seem unfair, but both are great for different reasons. Resident Evil 5 builds off the game play enhancements of its predecessor and adds in 2 player coop.

While the atmosphere might never be as tense as it was in Resident Evil 4, this game offers some great action scenes, challenging, but never annoying, levels and tons of replay. With Newgame+ you can play through again with all your gear, and with an expanded Mercenaries mode the game only gets bigger after the first playthrough. 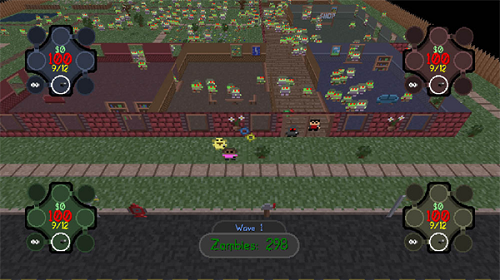 Don’t let the cheesy 8 bit graphics and bad soundtrack scare you away: for the grand old price of $1 on the Indie channel of the Games marketplace, you can enjoy one of the most addictive and fun zombie games out there.

Featuring 4 player coop, players will have to eliminate increasing difficult, and lengthy, waves of zombies while collecting cash from their corpses to purchase new weapons between waves. The weapons are satisfying and diverse, pushing you to keep making money and upgrading. 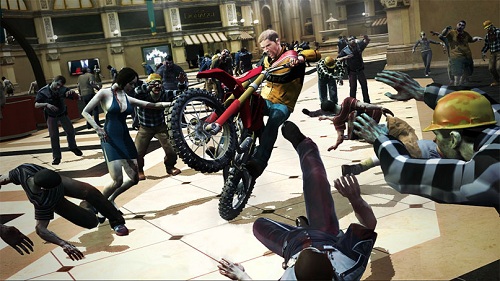 Greatly improved over the first game, Dead Rising 2 continues to show the world why hiding out in a mega mall is actually a cool thing to do in a zombie apocalypse.

Mostly a free roaming sandbox game, though with some limitations, Dead Rising 2 allows players an incredible amount of freedom when it comes to dispatching the undead. With dozens of zombies able to be on screen at any moment, the ability to combine almost any two items together to make a new weapon and more silly hats than Team Fortress 2 is hours and hours of fun. 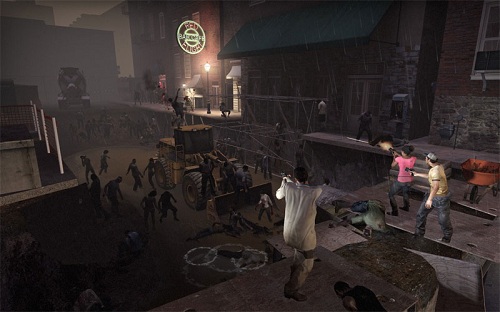 While I might prefer the atmosphere and tension of the first Left 4 Dead more than the second, the sequel nevertheless offers a whole lot more gameplay than the first. This time around there’s a longer and more involved campaign, more multiplayer modes and even a fresh new game mode variation each week.

Set in New Orleans, a team of 4 survivors must work together to escape the city while traversing a number of interesting locals such as carnival fun houses, shopping malls and even a swamp or two.

With some great environmental effects, such as the storms in Hard Rain and the smoky kitchens in Dead Center, players will have to be on their toes at all times or risk being pulled away from the safety of the group. 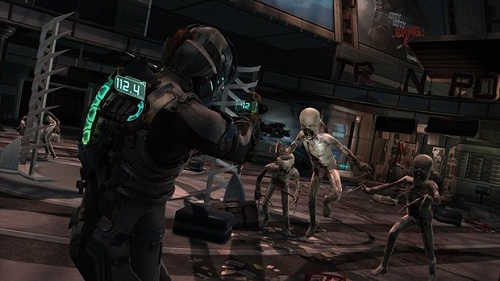 This sequel really upped the “undead in space” genre by a whole notch. Offering more scares and action than the first, Dead Space 2 is one heck of a ride from start to finish.

With intelligent level design offering both challenges and scares (some more disturbing than others), fun abilities such as the “stasis” module used to freeze time and enemies, and weapons that do some visible damage, you might be at the edge of your seat the whole time but you won’t regret a minute.

While Dead Space 2 is principally a single player experience, and one that’s so intense it’s even fun just to sit by and watch someone else play it, it also has a competitive multiplayer mode that isn’t all that bad.

Unfortunately not every title made the cut to the top 10. Here are some honourable mentions that are still worth your time though.

Dead Island is new and fun, but halfway through it stops being all about zombies. And my goodness is it ever buggy.

I made a game with Zombies in it! while it’s theme song is incredibly awesome, it doesn’t offer as much replay as some of the other twin stick shooters do.

Be sure to also check out our First person shooter Chronology and Are Video games a form of Art?