Xbox 360 and GoW could start seeing in 3D

The title says it all my dear gamers. It’s true, Microsoft have started paying game writing companies to produce games that are available to play in 3D. The game wouldn’t be completely in 3D, it would just be an option that you could select in the ‘Options’ menu, since normal 2D games still will exist. 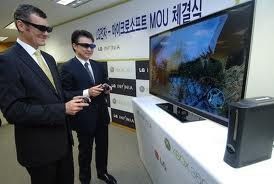 To be honest Microsoft haven’t overpaid the companies, they gave them an idea, and a little bit of money to get started with the game. There’s currently one game in the 3D development process, and nearly ready to be released. In fact it’s so near that, the so called 3D gaming release date is April 8th 2011, the release for Gears of War 3.

That’s right, one of the best ever, most violent, trash talking and popular games might have 3D. Now I say ‘might’ because the producers don’t like to give away spoilers and want to keep it a surprise, but up to now it’s 70% sure that it will have 3D. If you’ve played Gears of War, then you know what kind of game it’s like, if you haven’t, go and find out now. It’s probably one of the most gruesome games ever made. The main reason the developers might have equipped the game with 3D gameplay is because of the insane explosions the new Gears of War 3 is going to have. Or to scare people since the new monsters can pop out any time in dark, scary scenarios through out the game. Just think, you could be playing, in 3D, walking through a deserted, dark, creepy hospital and a monster just jumps out at you while screaming. And in 3D! I would advise you to always wear a diaper, and have a pillow next to you.

If they do release it in 3D it’s going to be awesome. Anyway the 3D opinion was supposed to bring hardcore gamers that new, better and more realistic gaming experience of the future. If Microsoft do manage to pull it of, and let’s not forget the game developers, it will revolutionize the whole gaming market.

Anyway for now that’s the most info on 3D gaming, as 3D itself isn’t that big of a deal anymore, since there are real 3D TV’s for your house hold.