They say geeks have no sense of style, and that phrase or idea has been repeatedly proven wrong by all the cool Xbox  modders who make sure all the hacks and mods look as innovative and creative as possible. 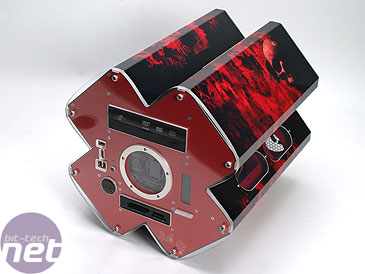 A couple of years ago, one of the modders created a stylish Xbox case mod which actually looks like the letter ‘x’. The design was created by PYPE industries. The case mod comes in under the brand name of Invasion and would be a welcome break for many who have been tired of the bland designs that Microsoft coaxes us to us.

The stylish case mod can be decked in any color you want and even the designs could be changed, as per your requirements. Using tough acrylic, white cold cathode and other materials, the case mod comes with a white ethereal glow which makes your console totally futuristic and cool to look at. It also comes with a temperature readout and stands on four rubber feet.

The Xbox case mod comes with other specifications such as Foxconn’s nForce 590 SLI motherboard, a Gigabyte GeForce 7950 GX2, 2GB RAM, water cooled CPU and others. It looks as if this is going to be a 5really popular mod if it can be bought easily. While this stylish Xbox Case Mod has its attractions and plus points, that should not stop you from trying cool stuff like the Steampunk Xbox Mod. If they were only easily available, most Xbox fanboys would have gone crazy.