Razer has announced that it will be releasing an old school arcade style fighting pad with joystick for the Xbox 360. 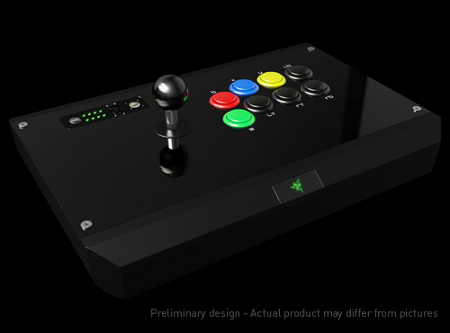 Razer is no stranger to designing console peripherals, specializing in gaming mice and special edition controllers, and is promising to give Fighting game addicted gamers something to brag about.

The stick and gaming pad will be designed to mimic the sort of controls that used to go hand in hand with every arcade fighting game. Similar gaming peripherals have been designed in the past and more than a few modders have even taken it upon themselves to bring that arcade feel to their homes. Soon, the rest of us can enjoy the same experience without the hassle.

According to sources, the peripheral is being designed with the help of over 200 Street Fighter 4 gamers and modders who will soon be taking part in a special closed beta test. Their feedback will directly affect the design decisions as well the as the final product that Razer wishes to release. It’s always nice to hear about companies who care about the gamers and listen to what they have to say.

If you consider yourself a Street Fighter 4 pro, and are no stranger to arcade style controls you can try to petition for one of the coveted spots on the beta team over at Razer’s website before it’s too late.

Everyone who gets accepted into the program will receive one of the arcade stick prototypes sent to them, which they will be allowed to keep afterwards. Not too bad of a deal. Though, on the whole, it would have been pretty nice if they had gotten these bad boys out the door in time for the release of either Street Fighter 4 or it’s special edition.

Not to worry, other fighting games are on their way. Check out the Dead or Alive 5 announcement as well as the Persona 4 fighting game that are coming our way. With any luck those titles will be able to put this peripheral to good use.