We all know that few good creations in this world were stumbled up on, and here is a story of one such creation. This Logitech Chillstream Xbox Ps3 Controller project was originally started off in view of redesigning an Xbox controller with an inbuilt fan. 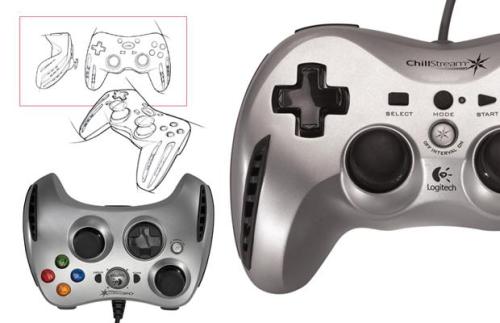 Matthieu Gerard were able to come up with a great design, after refining the controller based on reviews and competitor product comparisons. In the end they came up with a ‘tunned effect’ design which lets the air flow through the controller no matter how you hold it or how long you handle it. This tunnel effect gave the Chillstream controller an identity of its own and a chilling cool looking Ps3 controller was picked up by Logitech. This Logitech Chillstream Xbox Ps3 controller is best suited for those players who play for hours together, which makes the controllers heat up.

If you are looking for more on Xbox controllers then you should look at the Splatter Paddles for Xbox Controllers and Morph for Xbox 360 controllers.