Gears of War Movie May Star the Rock

What do Gears of War fans think of the Rck taking the part of Marcus Fenix in a hopeful adaptation for a Gears of War movie? Would he do so well, does he deserve such a character, can he do real battle? 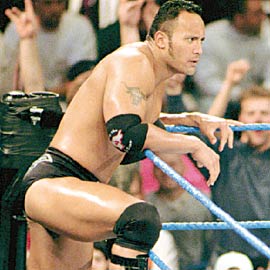 The screenwriter for the upcoming Gears of War movie is definitely considering the Rock, Dwayne Johnson, to be cast as the part of badass Marcus Fenix. We have seen the Rock in both Action flicks and comedy flicks and can say that he may actually fit the part. The thing is, since he it is a video game and not a character made for a film, would it still be a good casting call?

Should he do battle in the actual Gears of War Game before to be fit? Should he haqve to beat the game to be truly considered for the role? What do you think of the Rock and Marcus Fenix?