During their press conference over at Gamescon in Europe, EA released a few details of its future line-up, including the revival of the FIFA Street Franchise. 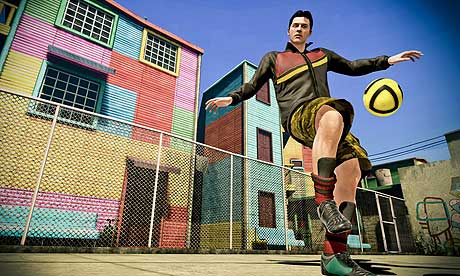 Unlike in the larger, official FIFA titles which feature full fields and players, in Street smaller teams will face off against one another in a variety of colourful locations. In total, there should be around 35 different locales, from a wide variety of countries across the globe, in which players can test their mettle.

The stadiums (if we can even call them that) will reflect the urban environment of the country. From back alleys, to rural, to suburban there should be no shortage in the variety of back drops this time around.

Like in past franchise entries, one of the gameplay focuses will be on pulling of nifty tricks and performing fancy footwork as you deak out opponents and make your way towards the net. Players can expect an enormous range of skills and special moves to be at their disposal, along with a large roster of players.

The title will be compatible with the EA Sports Football Club social connectivity and gameplay service, meaning players will most likely have little shortage of competitors to take on for a few challenges.

According to sources, this entry is being helmed by series veterans over at EA’s studio in Vancouver, Canada and should be hitting the shelves sometime in early 2012. With any luck it will stick to the winning trend that sports titles seem to be on these days.

In other news, be sure to read Counter-Strike: Global Offensive coming to Xbox 360 and Square-Enix to possibly Split.