While Black Ops quickly changed how players set-up their classes from Modern Warfare 2, MW3 could certainly bring something not too different to the table from that which was seen in MW2. What exactly are the best classes, and could we see them again in MW3?

With Call of Duty: Modern Warfare 3 on it’s was in the coming months, it is important to brush up on the skills that Modern Warfare 2 gave us all and relearn the game play mechanics of this game, mecahnics that will (hopefully) be slightly different in some ways, but over all feel like the old MW2 once again. Clearly, Black Ops and MW2 were both very different from each other in their feel and play style, so let’s look at MW2 to see what really worked well, and what could potentially work well again in MW3 if we are to see much of the same weapons and perks. 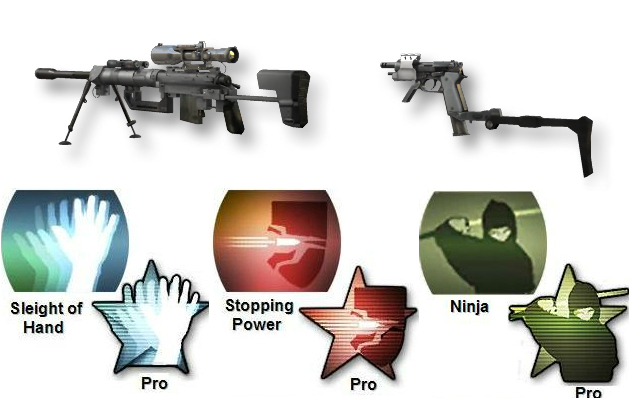 In Modern Warfare 2, everyone and their grandmother was a sniper. Some of us were actually good at it, and Black Ops changed the tides of sniping, and in my opinion almost killed it entirely, though really made it more about skill rather then pointing and shooting. Maybe in Modern Warfare 3 Infinity Ward will fix sniping to possibly not make it so easy (and hopefully find a permanent fix for no-scoping…), but also fun to do for newcomers once again. In MW2, my set-up was perfect. I had everything I needed. First off, I ran with the Intervention with an ACOG Scope attached to it. The intervention was the best Sniper Rifle for regular matches (more on Hardcore in a bit) and did some serious damage to anyone. A one-shot kill was almost guaranteed, and with the ACOG Scope, you could snipe on virtually any map with great precision and accuracy. I coupled this with the M93 Raffica which had the FMJ attachment. The Rafffica is a beast of a weapon that is the ultimate side arm. In Hardcore matches, it is a one-shot hit (usually) and in regular matches deals a great deal of damage with a very rapid firing rate. My equipment was a Claymore and Stun Granades, and the perks I used were Slight of Hand Pro, Stopping Power Pro, and Ninja Pro. On all of my classes, I used Ninja Pro, as it was amazing when coupled with my Turtle Beach – Ear Force X41s. You can hear everything when Ninja Pro is activated and you are wearing headphones, and knowing that your enemies cannot hear you is an added bonus! 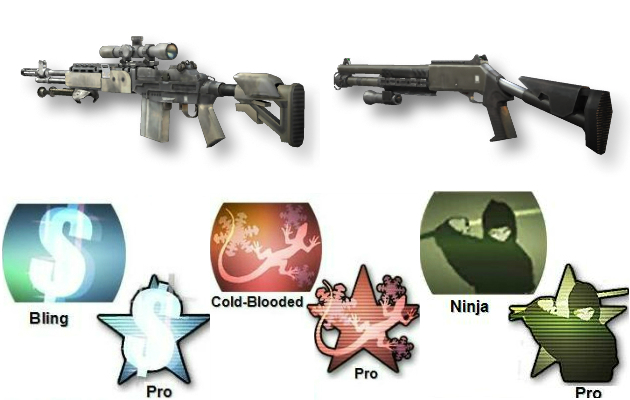 For Hardcore matches, the M21 EBR was my sniping weapon of choice. This weapon has slightly less accuracy and damage then the WA2000, but had a high fire rate, and a better feel in my opinion. I equipped it with the ACOG Scope and a Silencer for ultimate carnage with a stealthy approach from any range, and backed it up with the M1014 shotgun as my secondary, equipped with a Grip and a Silencer as well. My equipment was, again, a Claymore and Stun Grenades, and the perks I used were Bling Pro, Cold-Blooded Pro, and Ninja Pro. Hardcore games were my favorite, especially Hardcore Search and Destroy, and this class was one of two all-time favorite classes. Next up, let’s look at my favorite “run and gun” class, my SMG class. 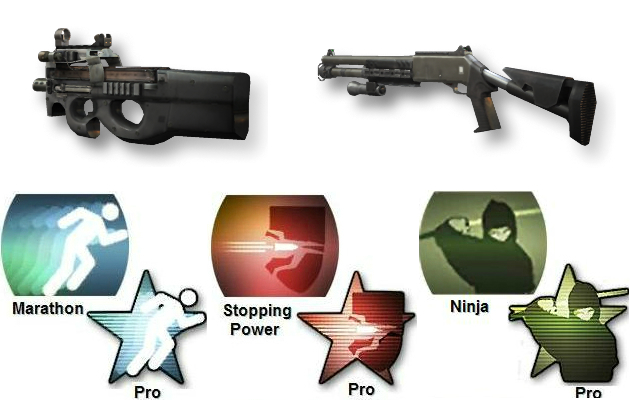 Modern Warfare 2 and Black Ops didn’t have much differences when it came to run and gun tactics, though what really is there to change? Other than a few gun changes it was relatively the same, and I really did miss my beloved P90 to no extent. Obviously, my primary gun was the P90, and I equipped it with FMJ rounds for ultimate destruction. I may not ever know why, but I did so much lethal damage with this gun, and it was really astounding to me how powerful this gun was. I backed this up with the M1014 as my secondary which was equipped with a Grip, and used Semtex Grenades and Stun Grenades as my equipment. My perks were Marathon Pro (for unlimited sprinting), Stopping Power Pro, and Ninja Pro. This class always ran train on people, and I was unstoppable at times. Some of you may have used Lightweight Pro as your second perk, but I believe that you didn’t need to be fast (usually) unless you were playing games like Search and Destroy or CTF, which I normally wasn’t. This class is a great run and gun class, and something I highly recommend that you all try, as this is my second all-time favorite class. 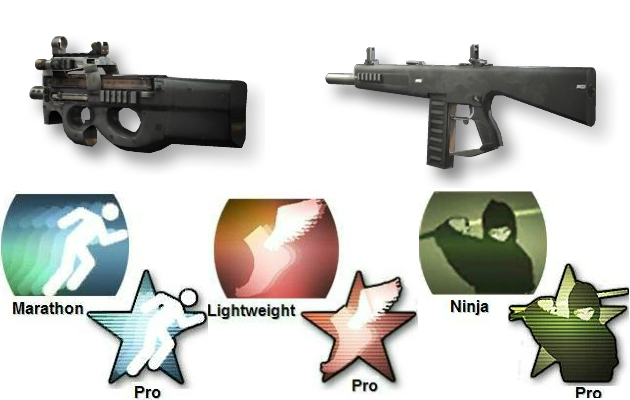 For Hardcore matches, there wasn’t much that one could do in terms of running and gunning, it usually meant instant death. Nonetheless, there was always a need for someone to be quick when playing games like Hardcore Search and Destroy,  or jumping into a Hardcore Most Pit playlist. For this, I turned to my trusty P90 again and equipped a Silencer to keep my whereabouts unknown. I backed it up with the AA-12 shotgun with a Grip, equipped Claymores & Stun Grenades again, and used Marathon Pro, Lightweight Pro, and Ninja Pro in order to penetrate deep into the enemy lines are grab the intel, as well as leave a trail of dead n00bs. Next, a look at Assault Rifles and the deadly combination that served me well for so long. 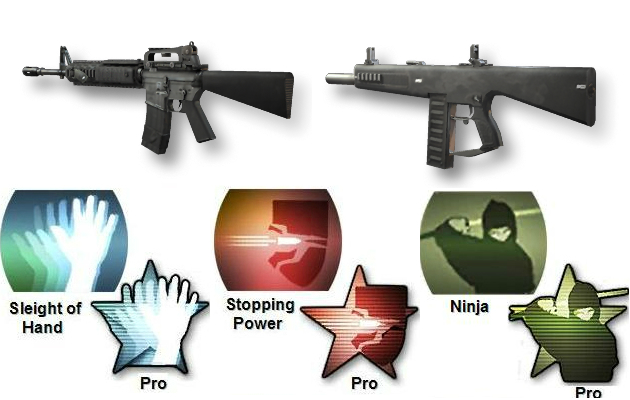 Between Black Ops and Modern Warfare 2, Assault Rifles too stayed the same, for the most part. Some of the mechanics we re-worked, but the guns functioned in the same way over all; using an Assault Rifle gives a blend of the long-range and short-range tactics. One can run and gun, or stay back and pick off enemies when necessary, all without changing your class around too much, if at all. For my Assault Rifle class, I could not pick just one gun, I had to pick both the M16A4 and the SCAR-H as my favorites. It really just depended on the day and mood that I was in, as one is a 3 round burst, and the other is full-auto (respectively) giving a different kind of play style for both. In either case, I equipped them with FMJ which allowed me to really destroy enemies no matter where they were hiding. I backed this up with my trusty AA-12 with a Grip, and again used Claymores and Stun Grenades. My perks were Slight of Hand Pro, Stopping Power Pro, and Ninja Pro. 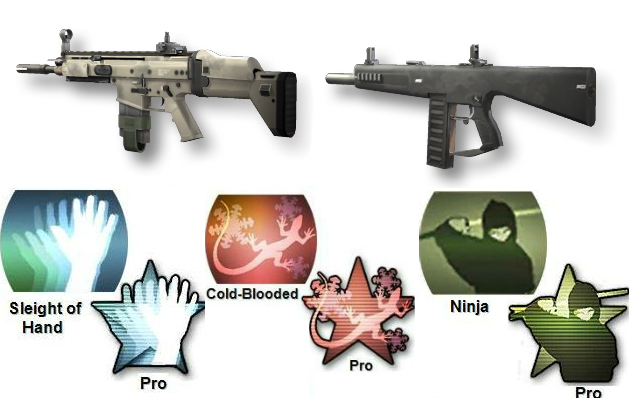 Hardcore matches were not too much different, as I would simply throw on a Silencer to my weapon, and use Cold-Blooded Pro rather than Stopping Power Pro, to allow  me to not be seen on any radar at all.

Will we see these guns and perks come back in Modern Warfare 3 again? What do you readers hope to see again in MW3, and what are you favorite classes for MW2? You have seen my favorite classes and combinations, and these class set ups are just my opinions, as everyone has their own individual play style, so I encourage you all to share your favorites as well! Along with that, I encourage you all to come play with my over XBL! Send a friend request to Killer Penguinz (with a space) and we can mop up some n00bs sometime on your favorite games!

If you liked this, you will love to read about the Call of Duty: Modern Warfare 3 Revealer and The 6 Best Survival Horror Games for Xbox 360!