EA Sports has announced and released a long rumored subscription service called “season ticket” for the  Xbox 360 and Playstation 3. 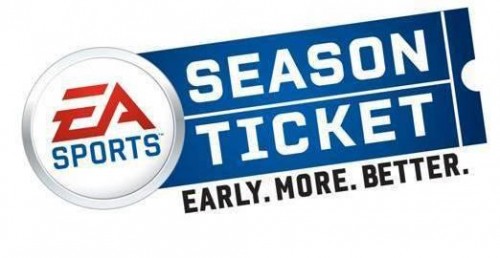 The season ticket service offers subscribers extra benefits to all of EA Sports releases this year with the exception of Tigers Woods’ PGA Tour ’12 and NCAA Football ’12 as they have already been released.

According to the press release this is what subscribers to the service can expect:

Three days before a game’s scheduled release, fans will be able to download and play the full version of all five participating titles on Xbox 360 and PS3. The digitally downloaded game will time out when the game is available at retail and consumers have the option to purchase the same full game on disc at retail. EA SPORTS Season Ticket subscribers can transfer all achievements earned during the three-day download period to the purchased disc, resulting in an early edge over the competition.

Subscribers will get a 20-percent discount on all available downloadable content for participating EA SPORTS titles. Downloadable content, which enhances and refreshes the core game experience, includes such items as Ultimate Team packs, accelerator packs, and gear upgrades.

Premium web content extends the game experience beyond the console to a web browser. All participating titles will feature premium web content that will be free to EA SPORTS Season Ticket members beginning with the premium Creation Center packs for FIFA Soccer 12. These packs provide a deeper set of customization tools and abilities within Creation Center to build your own teams and tournaments, and will be available to the consumer until the membership to the program has expired.

Subscribers are easily identifiable with an exclusive membership recognition badge displayed both in-game and on their EASPORTS.com profile.

If you’re going to subscribe to this service then good luck to you, Personally, I’m not into all these “subscription services” companies are beginning to offer, I think it’s just a way to get a few extra bucks out of customers’ pockets. So as you may already have guessed, I’d rather keep my cash in my pocket for now.